Oregon joined Colorado, Washington, Alaska and the District of Columbia in legalizing recreational use of marijuana, with decriminalization of recreational use effective July 1, 2015.  Little known is that Oregon already decriminalized possession of small amounts of pot over 40 years ago. This new law supported by a good majority of the voting public will now allow licensing of retail stores selling pot to anyone 21 or older, as well as allow limited growing and possession of larger amounts by any adult.

Oregon expects to reap many benefits that have followed legalization elsewhere including:

Oregon voters last November approved Measure 91, with 56 percent of the vote. Adults 21 and older can now legally possess up to eight ounces of marijuana inside their home and up to one ounce when outside their home. Adults can grow up to four plants per household, out of public view.

Based on interviews with reporters, Oregon lawmakers said Tuesday they were excited to reap legal weed’s rewards. Anthony Johnson, who co-wrote the law, said legalization means weed will be treated like beer and wine. It’s a victory for casual users, who previously would have been labeled criminals. 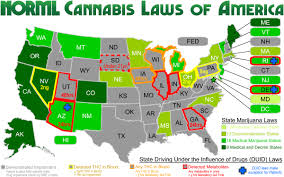 “It supports people who want to succeed in society,” Johnson said at a press conference. “There’s no reason we should saddle people with crimes on their record that prevent them from having good educational and employment opportunities.”

Before legalization, 7 percent of all arrests in Oregon were for simple marijuana possession, according to The Oregonian. The ACLU reports that people of color were more than twice as likely to be arrested for marijuana than white people. The enforcement issue will change dramatically, predicted U.S. Rep. Earl Blumenauer (D-Ore.).

“We’re turning a page,” Blumenauer said Tuesday. “We are suffering, and have for years, with unequal application of justice … [We’re now] able to focus on our attention of enforcement on people who would put it in the hands of our children, and away from criminalizing behavior that most people think should be legal for adults.”

Read the full Huffington Post article with videos explaining expected benefits to Oregon by this state joining others in restoring human freedom to grow and enjoy one of nature’s most remarkable botanical gifts without risk of government penalty or persecution..