Marijuana Is Inappropriately Scheduled. It should be Schedule III or IV at worst, and probably like other natural botanicals, not on the list of Controlled Substances at all; after all it very likely is Mother Nature’s most medicinal herb – and we are not referring to THC and getting high on pot, but rather the myriad of amazing cannabinoids in the plant that could be helpful nutritionally to nearly everyone and should be allowed as an ingredient in any supplement formulation. Read more on this in our article, “CBD Deemed Safe with Increasing Evidence of Medical and Nutritional Benefits.” 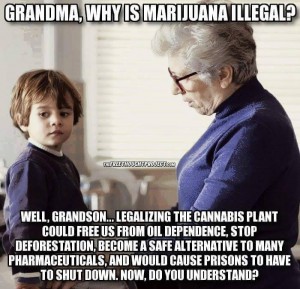 As one of the most comprehensive reports published on US drug policy and marijuana states, “The current system for classifying illegal (and most legal) drugs is flawed, outdated and unscientific. Established by the federal Controlled Substances Act (CSA) of 1970, this system erroneously places marijuana in the most restrictive class, Schedule I, reserved for drugs with a “high potential for abuse”, “no currently accepted medical use” and a “lack of accepted safety “.1”

It continues, “Despite unique restrictions on conducting marijuana research, a plethora of scientific evidence has nevertheless emerged that not only confirms marijuana’s medicinal benefits 2 but also its wide margin of safety.3 Yet because of marijuana’s Schedule I designation, physicians cannot prescribe it and instead can only recommend its use without legal access or protection for their patients. Researchers face daunting hurdles to studying any Schedule I drug, including a rigorous approval process by both the Drug Enforcement Administration (DEA) and Food and Drug Administration (FDA) for every trial.4”

It concludes the patent unfairness of Marijuana’s classification, and signled out treatment for reasons no one can reasonably justify. “But that is only part of the problem. DEA and the National Institute on Drug Abuse (NIDA) have effectively blocked the standard FDA development process that would allow for the marijuana plant to be brought to market as a prescription medicine.

Currently, marijuana is the only Schedule I drug that DEA prohibits from being produced by private laboratories for scientific research. Read more by clicking here on a leading drug policy organization concluding years ago Marijuana is clearly mislabeled by the US government as a Schedule I Controlled Substance with no reliable scientific support for doing so, and tons of researching proving it is misclassified.

Simply because big money is being made by suppressing its use, including government worker unions, not just the obvious financial opponents of Big Pharm, Alcohol and Tobacco. Read our article “Why Big Pharma is Opposed to America’s Fastest Growing Industry – Medical Marijuana.”